Oct. 17 (Bloomberg) — Constanta, whose natural harbor on the Black Sea has welcomed ships since at least the sixth century B.C., is emerging as Europe’s biggest grain transport hub in the $4.2 billion global wheat trade.

Buoyed by booming wheat and corn exports from Romania and its neighbors to the Middle East, grain volume passing through the port was up 30 percent by August from a year earlier and will top last year’s record by year end, according to port spokeswoman Monica Velic. Cargill Inc., the largest closely held U.S. company, and freight handler Transport Trade Services more than doubled grain capacity at their Canopus Star terminal at Constanta in August.

Shippers sent a record 533 Panamaxes and other dry bulk carriers to Constanta’s deep-water berths in 2013, a 21 percent increase from the previous year, port data show. Rising crop yields in Romania, Bulgaria and Hungary, along with new silos and terminals to handle the growing grain flow to Egypt, have vaulted the port ahead of Rouen, France as Europe’s grain hub.

Output of grains has gradually increased in Romania, Bulgaria, Hungary and Serbia, James Hyslop, director for Romania at the European Bank for Reconstruction & Development, said in an e-mailed reply to questions on Oct. 9. Constanta port was the main facility to benefit. It’s the only large port with sufficient capacity to serve the region.

Natural Riches
Grain exports will only continue to grow, said Peter Beerents, chief executive officer of Cibus Farmland Club, a Dutch adviser setting up its third Romanian farm for family investors. This is a land with a lot of natural riches.

Most of the grains moving through the port are being shipped to countries in the Middle East, and traders are benefiting from a surplus of vessels seeking the cargoes. The cost of carrying about 50,000 tons of grain to Egypt from Constanta averaged $12.63 a ton this year, down from $13.01 a year earlier.

In the last two months 138 dry bulk ships signalled having berthed at the port, according to data gathered by IHS Maritime, a Coulsdon, U.K.-based company, and collated by Bloomberg. More than half were Handysizes and around a quarter were Panamax ships. Constanta also ships scrap metal and coal as well as grains and other commodities on dry bulk ships.

Egypt’s Global Authority for Supply Commodities agreed to buy 600,000 tons of grain from Romania since July 1, more than the 525,000 tons it’s buying from Russia and 380,000 tons from France. Constanta’s berths, with depths of as much as 13 meters, can handle the Panamax-sized vessels demanded by GASC.

Shorter Trip
Constanta has an edge getting to the Egyptian grain market, the world’s biggest. Egypt’s grain port of El Dekheila is a trip of 1,188 nautical miles, or 3.5 days at sea at an average 14 knots, according to ports.com. That compares to 1,393 nautical miles from Odessa and 1,576 nautical miles from Russia’s Black Sea port of Novorossiysk, trips of 4.1 and 4.7 days.

The top four dry-bulk shippers from Constanta in the past two months were Polska Zegluga Morska PP, National Navigation Co, Lebanese Shipping Union and Samos Steamship Co., together taking 18 cargoes from the port in the period.

Fertile plains and black earth soils made the region that is now Romania a supplier of wheat to the Byzantium Empire in the 9th century and a dominant Black Sea wheat exporter in the 19th.

Constanta’s potential remains curbed by lack of navigability of the Danube, Europe’s second-longest river after the Volga, according to Beerents of Cibus Farmland Club and Toma Dinu, dean of the faculty of management at Bucharest’s University of Agronomical Sciences.

Trade Hurdles
At certain times of the year the river is so shallow that navigation is limited above certain tonnages, said Beerents. There are a lot of EU funds to tackle that, but they’re not being spent on deepening the river.

Even with limited Danube access, most of Romania’s grain is transported to Constanta by train or truck, Dinu said. Boosting the river’s summer navigability and developing fluvial ports would allow for exports to rise further, he said.

Growth of trade in Romania also faces hurdles including delays in clearing exports, the quality of the country’s roads as well as crime, according to a 2013 report by a Romanian regional development agency. A survey of exporters found more than 30 percent reported criminal activity such as stolen cargo that was often or nearly always a cause in case of major delays.

Constanta ranked as the EU’s ninth-biggest dry bulk port by tonnage in 2012, behind Italy’s Taranto and the Belgian port of Antwerp, Eurostat data show. Rotterdam led the list.

Romania’s rising grain exports and improving logistics have coincided with rising investment by Cargill, ADM and CHS, all of which own or have stakes in Constanta grain-export terminals, according to the port. ADM is the world’s largest corn processor, and CHS is the largest U.S. grain cooperative.

In the past you only had some local Romanian grain traders, focused on local markets, said Peter Falkenstein, a director at German farmland manager AIS Europe GmBH, which has operated in the country since 1999. Nowadays you have the possibility to choose. 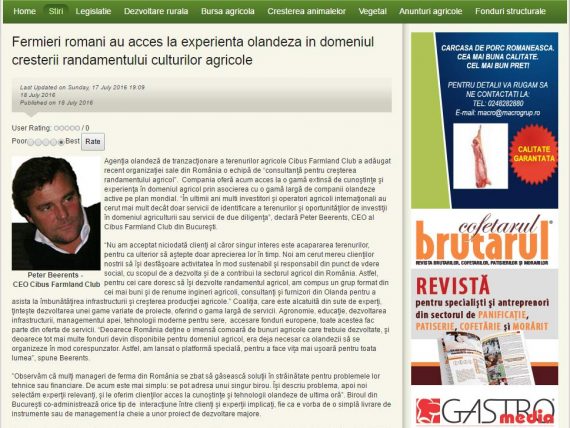 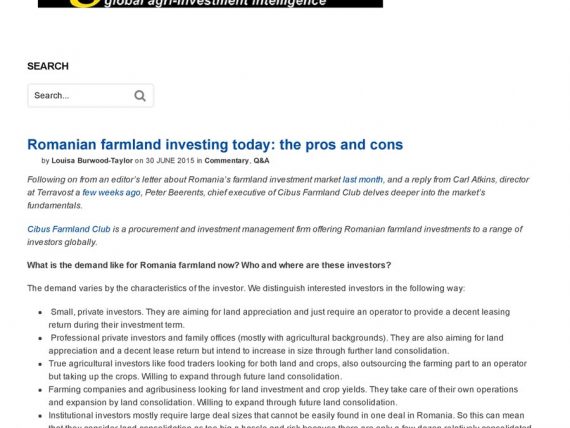 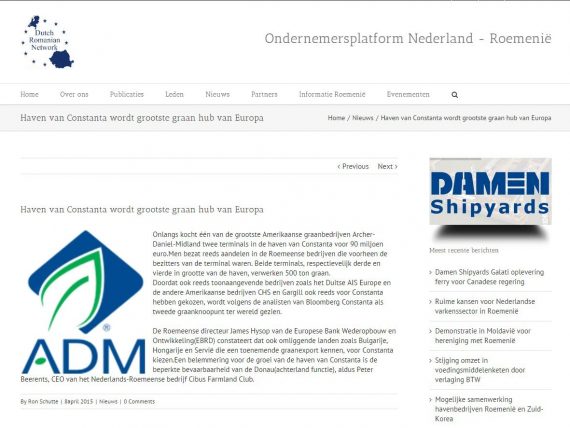 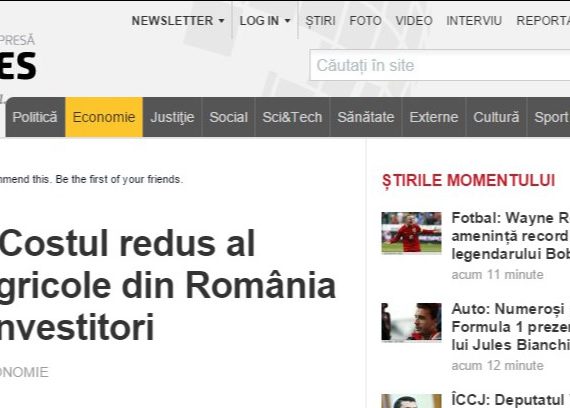 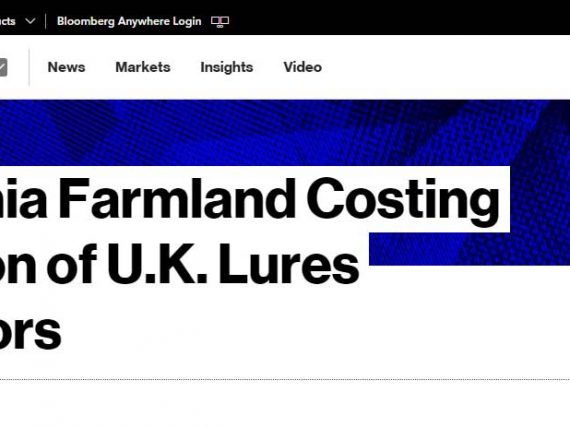 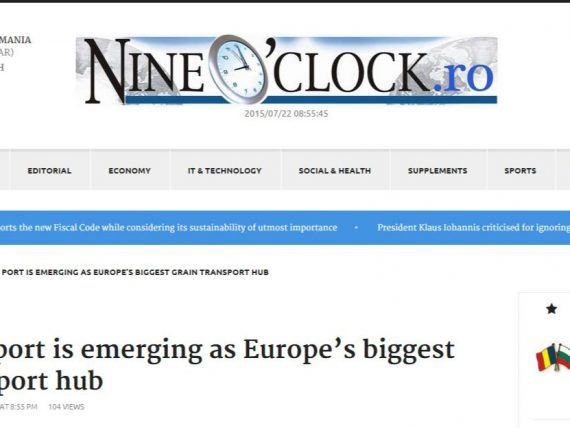 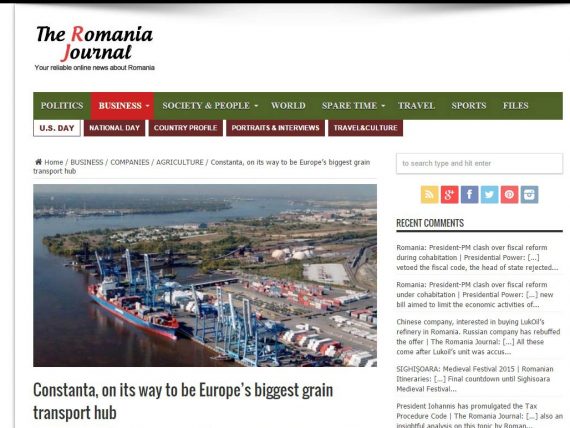 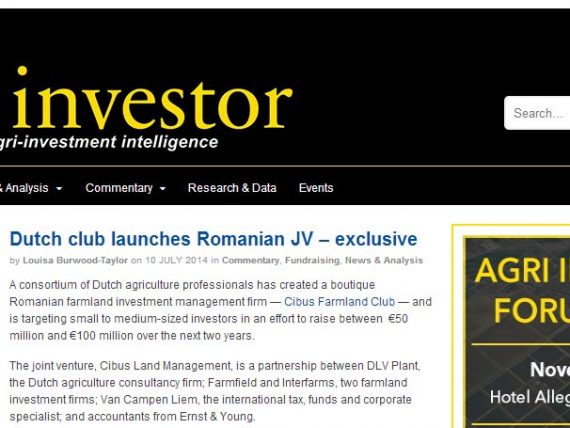 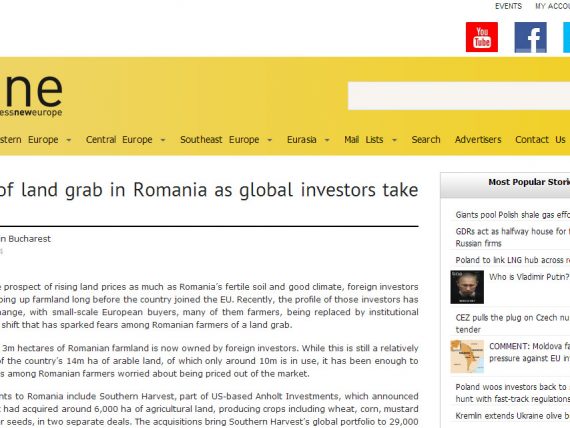